Saturday night, relief mostly resounded in the Diaz Arena after Makhtar Gueye scored the penalty kick in injury time. Yet there was also a sour aftertaste. Player of the season Maxime D'Arpino had to leave the field after 22 minutes with an injury. Afterwards, the verdict was severe for Maxime: a tear in the cruciate ligaments and also the meniscus was hit. We spoke to him about his injury and the long road he now has to travel.

Maxime, how are you doing now?

It's already better than after the race but of course it's hard to deal with. I was working on a strong season and to end it like this is a shame. Now I await the appointment with the surgeon on Monday to know when I will be operated. That will probably be sometime next week. Of course, after the match you ask yourself the question "why me" but there is no point in hanging on to negativity. I have to look forward. An injury is just part of soccer.

Will the operation take place in Belgium?

No, I am leaving tomorrow for Lyon. There, one of the best surgeons in France will operate on me. I will also do part of the rehabilitation in my hometown of Lyon. It is nice to be close to your family during such a difficult period. After three months, I will come back to Belgium and I will continue my rehabilitation here.

What's remarkable, when I see you walking you wouldn't say you were seriously injured.

Indeed, that's the weird thing about a cruciate ligament tear. Currently, I even do exercises at the club to keep my knee as flexible as possible. My knee is also not as swollen, which is positive for the surgery. But make no mistake, I feel the pain (laughs). Especially if I do a wrong move. After the surgery, I will also be less mobile than I am now. 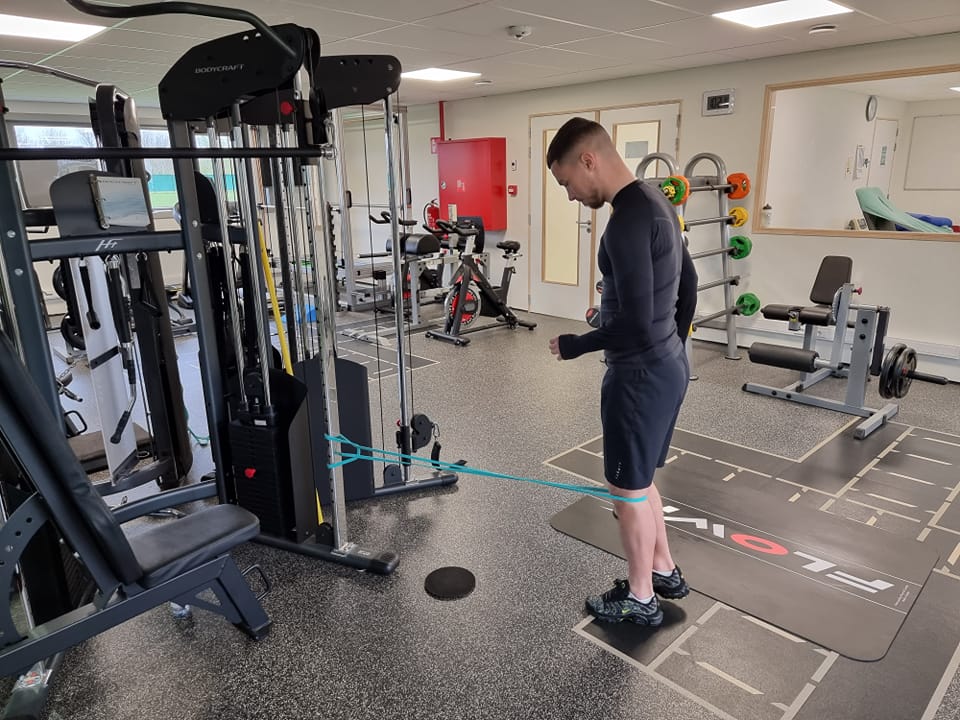 "I do exercises at the club to stay mobile"

There was a good chance that after such a strong season there would be interest from several clubs. How do you see the future now?

I try to focus on my injury. First I have to make sure I get back to my best level and then we'll see how it goes. I can't think about a possible failed transfer right now. Otherwise you remain stuck in a ray of negativity.

Before the match you did get the 'Puis/Verbiest Trophy' as player of the season. That must be gratifying.

It is always nice to receive an individual award.I am therefore very satisfied with it. It also confirms that I am doing well in these two seasons at KVO. Of course it is a pity that I did not get to enjoy the prize to the fullest.

How do you look back now on this yet difficult season for KVO?

It was indeed difficult at times but our basic goal of staying in first division succeeded. Luckily we were able to get that point against Seraing, so we don't have to wait until the last match.

However, there is also some good news to pick up because in June you will become a father for the first time.

A little daughter indeed. Maybe I will be able to experience it more consciously during my rehabilitation in Lyon than if I were here in Ostend. That is a blessing in disguise. I will try to pull myself up by it. My family will be very important to me in that period.

To conclude, when will we see Maxime D'Arpino back on the soccer field?

It's hard to predict, but normally you have to calculate at least six or seven months. For me, it is especially important not to restart too soon. If you want to start playing again too soon, it is possible that I will have problems again. I have to make sure that I am top conditioned and free of pain before I play again.

We wish you a lot of health and above all good luck with your future fatherhood.