Robbie D'Haese (22) is back from injury and joined the group training today. We spoke to him about his rehabilitation and look ahead to Saturday's game against Kortrijk.

As of today, you're training with the group again. Relieved?

"And indeed! I played my last match against Zulte-Waregem at the end of August. But the last game I really felt 100% fit, was on game day two against KRC Genk. Against Zulte-Waregem and Standard I could not play a full game, because I was already suffering then. I couldn't shoot at goal and crosses, that didn't come out either. Two aspects that are necessary for a flanker. I held back and that made me crazy. In those two matches I actually forced myself. As a result, I was out for a few weeks." 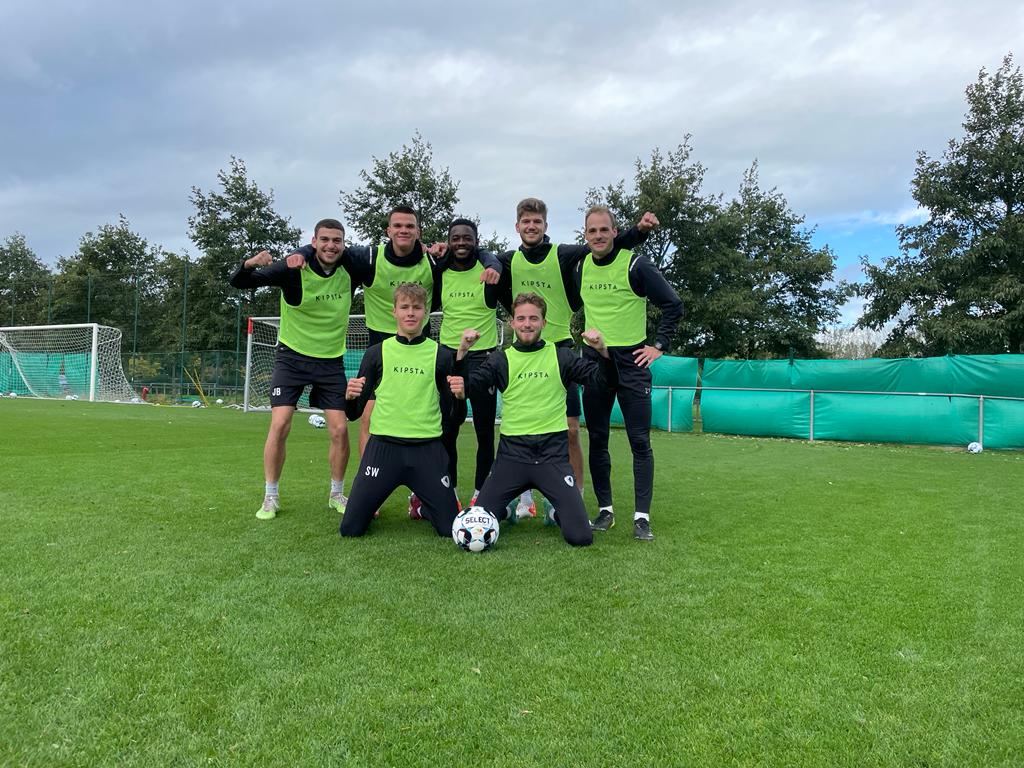 Robbie D'Haese back on training and immediately in the winning team

So what exactly was the problem?

"In the past, I often suffered from muscle injuries, but this injury was different. It was more of a tendonitis. One day I felt good, the next day I was in a lot of pain. My last weeks looked like this: training, a few days of rest, training and a few days of rest again. In hindsight, maybe I should have taken a few weeks of constant rest right away. I did that now and the pain seems to have disappeared."

How did the injury affect you mentally?

"Of course it was another disappointment. Unfortunately, I have experience with injuries and I know how it feels to be on the sidelines. After the second week I had a hard time. Especially when I came to watch the home games. You want nothing more than to play, but you can't."

"I was in weekly contact with the physiotherapist and doctor. I'm also following a special diet now: no more milk. So no butter, cream, yoghurt, ... That should help to prevent injuries. In addition, I often train individually, of course. With specific exercises to strengthen my tendon. I am grateful to the medical staff for the good follow-up."

How did the coach react to your injury?

"In the beginning, he constantly came to ask how my injury was progressing and hoped I would be able to play next weekend. When the doctor informed me that I really needed a few weeks of rest, the coach understood that and gave me all the time I needed to return. When he heard that I would be training with the group today, he was very excited."

Saturday is the match against KV Kortrijk. Can the coach count on you straight away?

"I think Kortrijk comes too soon and certainly to start. Tuesday I would like to make minutes in the Croky Cup. That would be ideal. The cup is a goal for me this year. A cup adventure like that is always special."

What do you expect from the game against KV Kortrijk?

We'll settle for a draw, but we'll go for the three points. Going to Kortrijk is never easy. I think it will be a close game. Both teams will be compact and won't want to swallow any goals. It will again be a game with a lot of duels. With Vandendriessche, Jonckheere and Palaversa, there are also some ex-KVO players around.

Your best friend Jelle Bataille is now playing at Antwerp. Do you follow his performance?

I'll try to catch his matches. He's doing well at Antwerp. He can play both on the left and the right flank. He takes his chances. We also went to Frankfurt together when he was suspended. We still have a lot of contact and our relationship remains good. I don't begrudge Jelle this step. I'll see what my future brings, but now full focus on staying fit and picking up points with KVO."