INTERVIEW OF THE WEEK: YVES VANDERHAEGHE

Our new coach is actually an old friend. Yves Vanderhaeghe signed a contract with the Coastal Boys until the end of the season. The objective is clear: to ensure the preservation of the team as soon as possible and to have a nice end of the season. Time for a chat with our coach.

Yves, welcome back. For many supporters and observers, your appointment was already a surprise.

"According to the press, it is a remarkable choice to go from a coach like Alexander Blessin to me but I don't think so. The data of this season show that I played the famous 'Gegenpressing' with Cercle. Only I don't call that 'Gegenpressing', but putting high pressure (laughs). That was also the case at the time with KVO. So my style of play is very much in line with what the bosses at KVO want. That I am not constantly busy with data? Data is mainly used in recruitment and is a handy tool to use during training, but it is not sanctifying. Oh well, I don't think I have that much to prove to the outside world anymore. Just look at my results: in my first four seasons I reached Play-off 1 four times. Of course, in soccer it's the present that counts, but even with Cercle I did pretty well recently, right?" 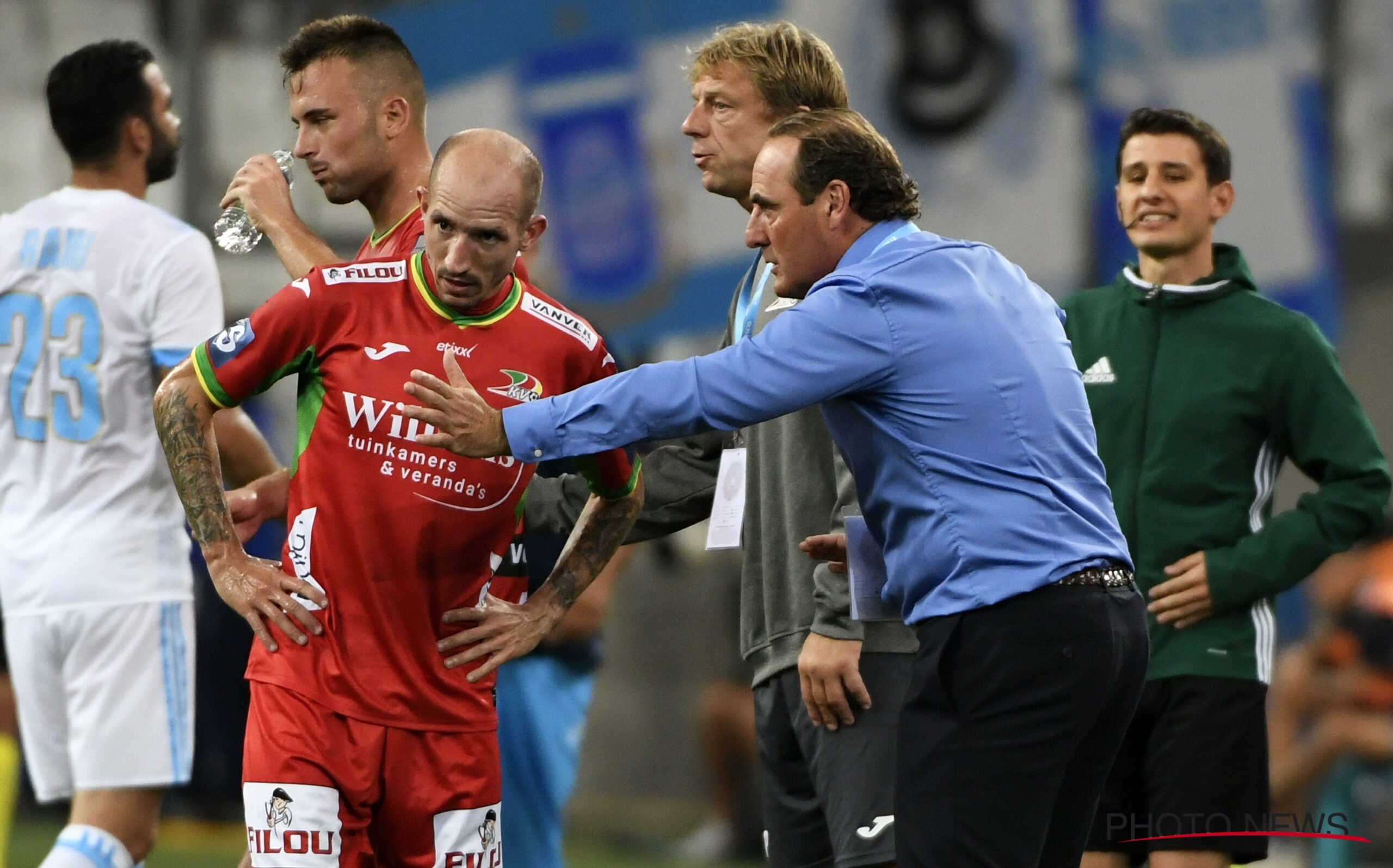 "Even in my first stint at KVO, I often played with high pressing."

at cercle i also played 'gegenpressing'. only i call it 'high pressure'.

Did you have to think long and hard about getting back to work at KVO?

"No, I am especially happy with this new opportunity. I had a good conversation with Gauthier Ganaye (Executive President) and I had a good period here. It is always nice to go back. A lot has changed here in the meantime but I have also seen many familiar faces again: Bart (Team Manager), Bram (press and communication), 'Lucsje' and Johan of course (equipment man), Geert (Sales Director), Tony (KVO-icon and catering man), Eddy (cook) ... As for the players, only Brecht Capon and Robbie D'Haese are still here. And the latter was actually still promising when I was here my first period."

You say a lot has changed since your last time here. What if anything?

"The facilities alone. If you see the training complex now, the players have all the facets they need. There are three bedrooms with beds, different possibilities for relaxation, a spacious locker room, meeting rooms, perfect training fields... When I was in my first period at KVO, the plans for this building were already on the table. Now that it's here, the results can be seen."

On the field, though, you started immediately with a heavy 3-0 defeat in Mechelen.

"I had just arrived here and didn't think it was opportune to turn everything upside down right away. I left the fielding and tactics to the other staff members who had been training with the boys all week. During the match, I did coach again and intervened where necessary. But my real work started on Sunday, the day after the match at KV Mechelen. I immediately did a video analysis and pointed out what we have to do better." 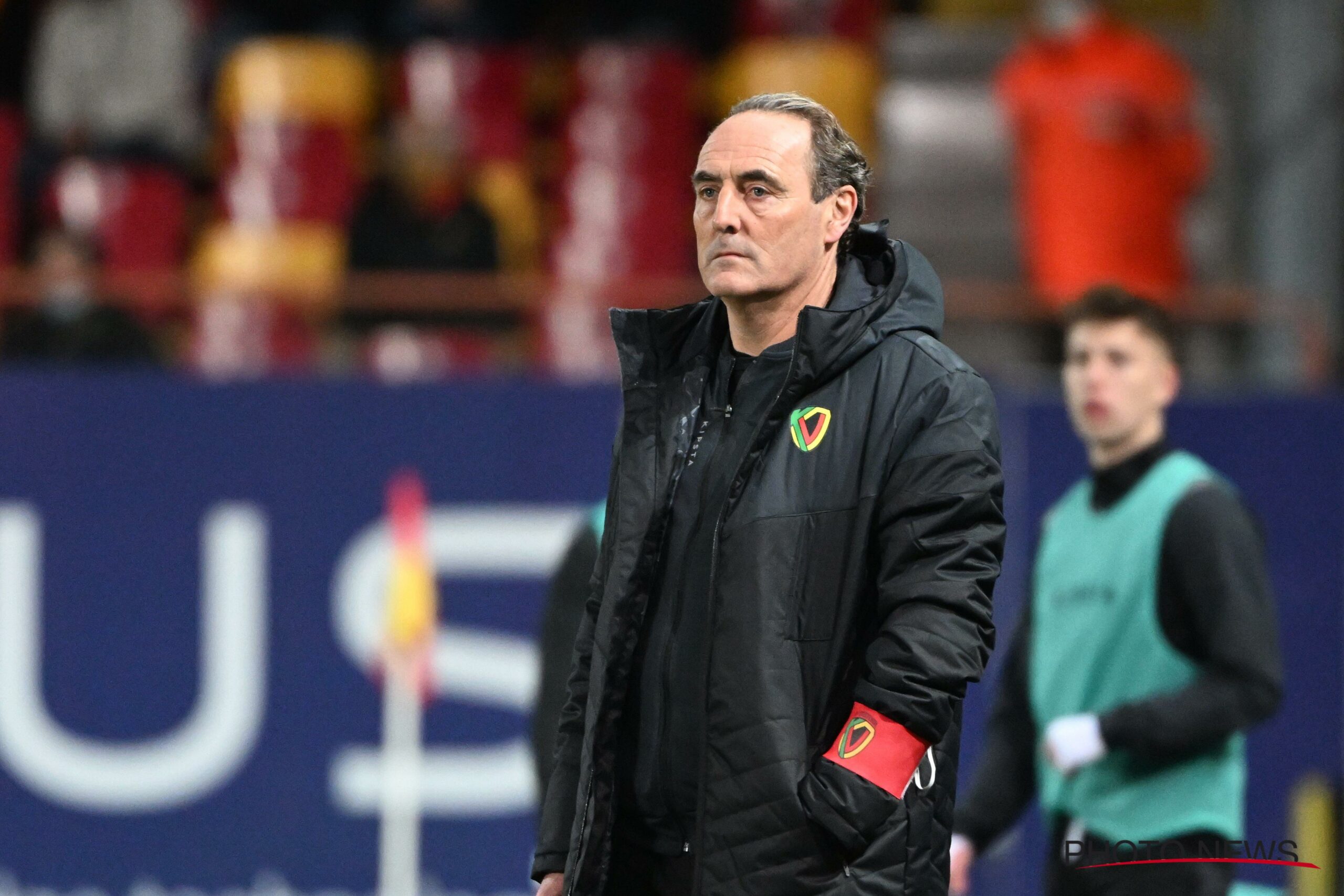 Yves Vanderhaeghe during his first match at Mechelen

What is that on?
Organizationally it was pretty good, but offensively we did not play well enough. We couldn't keep the ball in the team and hardly created any chances. We have to find a good balance between defending as a block and also attacking.

we need to find a balance between defending as a block and also attacking ourselves.

So lots of work to do during your first week.
Well, a first week like that is always very busy. You try to bring out your own personality in that first week, emphasize your own facets, but at the same time talk a lot with players and staff members. I have put as many emphases as possible. And apart from that, there were also some practical matters to take care of and those first press briefings. I have not been idle (laughs).

So how have you spent the past few months?

I spent a lot of time with my family and that was gratifying. As a trainer there are few moments that you are at home so you have to cherish those. Especially after the death of my father, I could use that. I also went on a few trips and did a lot of sports. I noticed that I am still very addicted to sports: padel, tennis, running, I even did a short ski. It was good to have some time for myself. But after a while it still starts to 'itch' again and therefore I am happy to be back at work. 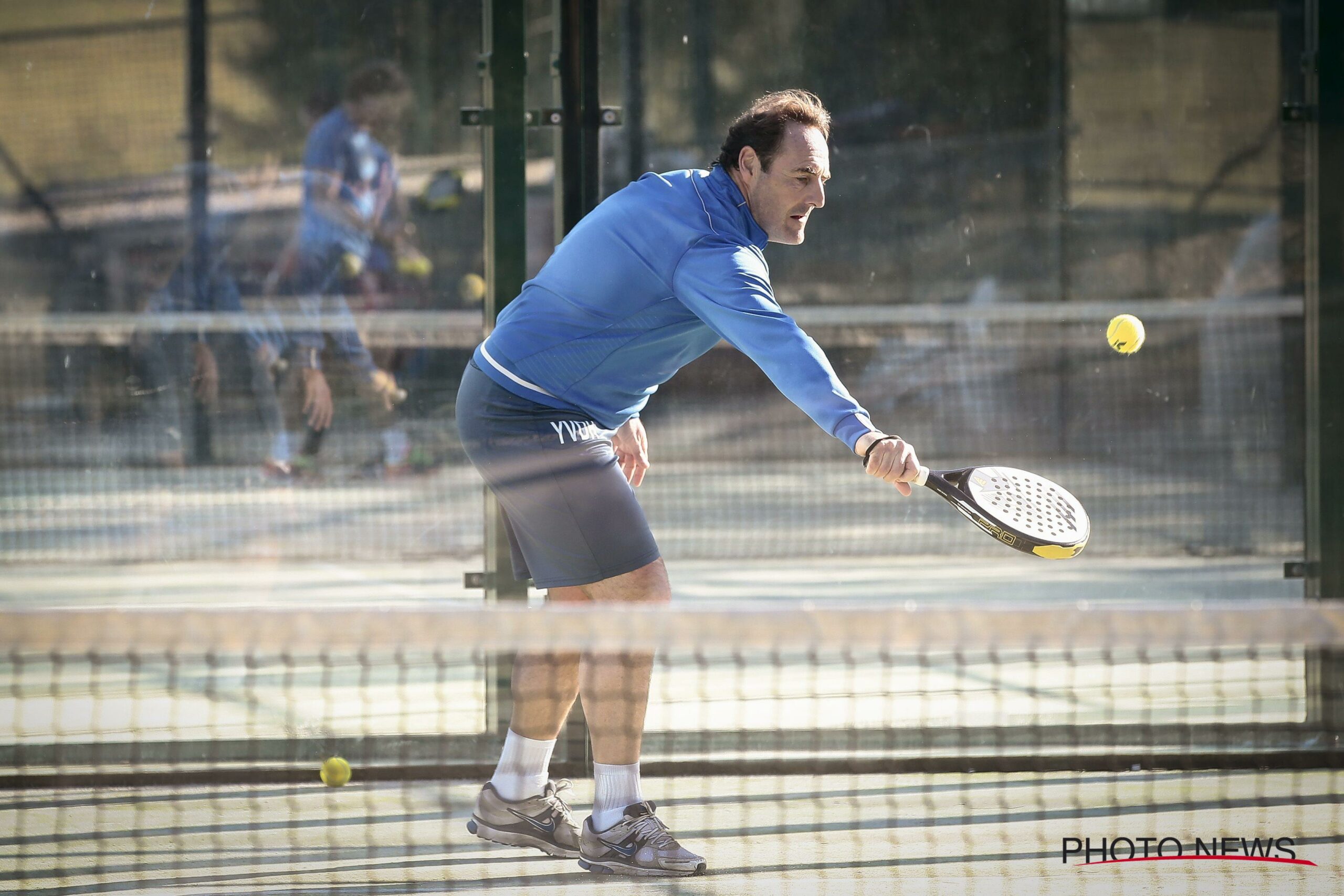 "I am still very addicted to sports. Padel is regularly on the schedule."

So have you been following much soccer in the past few months?

"Definitely. To give an example, after skiing I would often watch a few races. The nature of the beast hey. And as Cercle's trainer, I naturally followed the competition closely. So I knew KVO pretty well, although new players have joined in the meantime."

What are the goals left for this season?

In the first instance, of course, this is to ensure retention as soon as possible. We now have 7 matches left to achieve this objective. Starting Saturday against Standard Liege. It would be a great relief to get the necessary points against Standard and STVV. They are also two home games, so an ideal opportunity to win points. That way, we can go into the last five games with a more relaxed atmosphere and maybe we can make it a nice end of the season. The calendar is tough, but we shouldn't hide behind it.

Makhtar Gueye is the club's top marksman with eleven goals, but after the New Year he functions mainly as a substitute. How do you look at that?

Of course I heard some things about his mentality but so far I can't complain about that. He was always on time this week. Except today but that was because he couldn't pee before the doping control (laughs). He's a very emotional boy, I noticed that already when we were playing Cercle against KVO. Sometimes it expresses itself in the wrong way on the pitch, but I don't think it's a bad thing. So, new coach, new opportunities. And that goes for every player, by the way. The advantage is that I can speak French with him. That way, there can be no misinterpretation.

gueye came right on time all week. except today because he couldn't pee at the doping control. 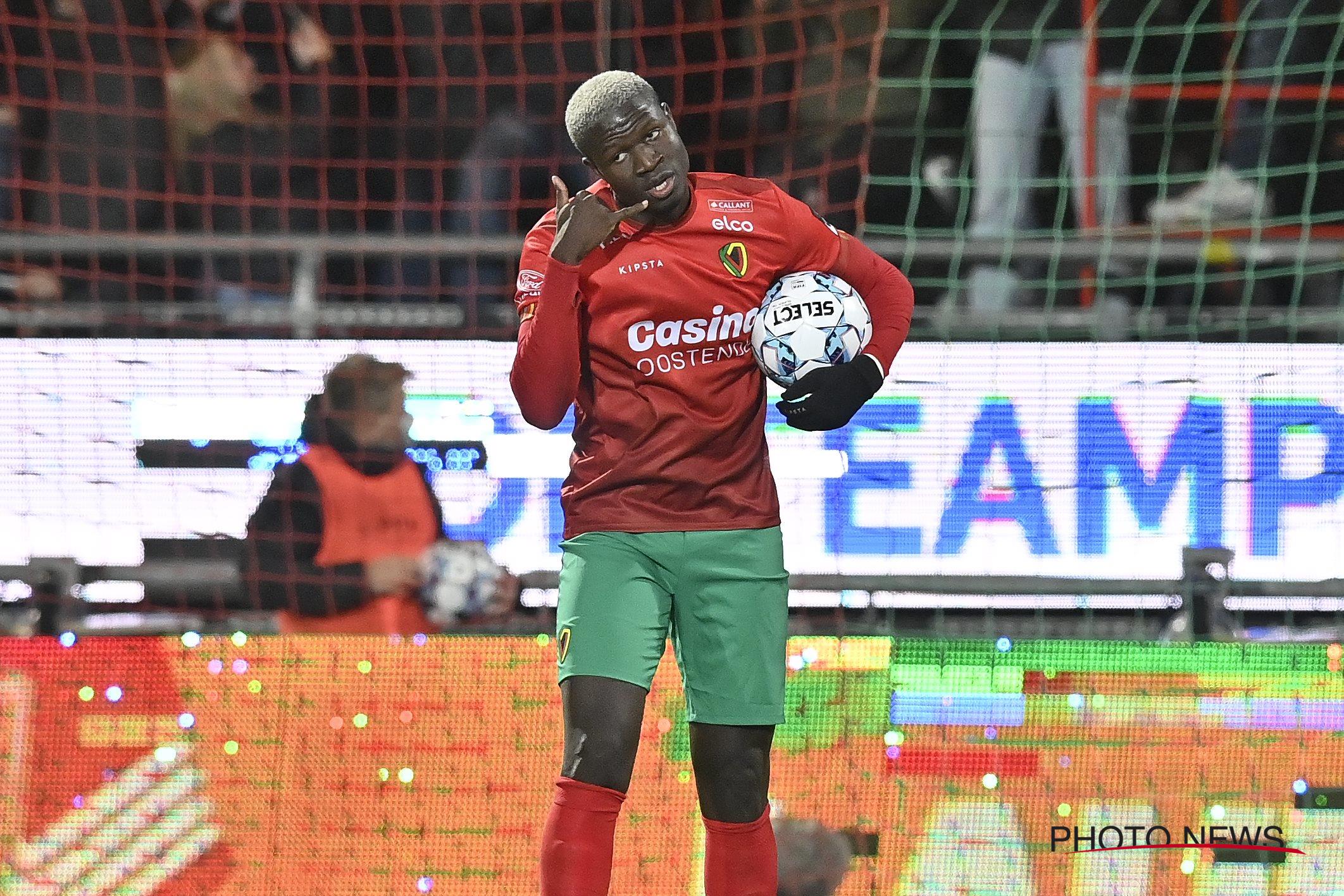 "Makhtar is an emotional guy but I don't think it's a bad thing. In any case, it's an advantage that I can speak French with him."

Between the poles you will also have to make a choice: Hubert or Sharps.

I read a lot about it in the press, but I focus on what I see on the field during training. Based on that I will make my choice in good conscience and I will also openly explain it to both goalkeepers.

Finally, are we sitting here with a satisfied Yves Vanderhaeghe?

Definitely. I have a huge drive, I want to make everyone better, and hope for a nice end to this season. What comes next, we'll see. I am looking forward to a great second adventure at KVO.

i look forward to a second adventure at kvo