HomeAll NewsKVO HAS A BIRTHDAY AND PLAYS TONIGHT IN RETRO SHIRTS

KVO HAS A BIRTHDAY AND PLAYS TONIGHT IN RETRO SHIRTS

Hooray, it's one of our birthdays! KV Oostende is blowing out 40 candles and we are not going to let that go unnoticed. Tonight we will play on the field of Koekelare in a retro outfit and the kick-off will be given by KVO icons Tony Obi and Yves Essende.

On the occasion of their 40th anniversary, KVO and Decathlon launched a design contest for the players' outfits at the end of last year. This competition already resulted in the white kit, which will be the official third kit of the coming season, but now also in a retro kit that goes back to the first success of fusion club KV Oostende in 1992.

"Among the supporter designs were several outfits in which the three club colours appeared as slashes on the shirt," says Bram Keirsebilck, press and communication officer..
"Those designs may or may not have been based on the equipment with which KVO first promoted to second division in 1992, after eleven years of trying.

That's how the idea came about to organise on 22 June, the 40thste The team also had the opportunity to play a practice match in a modernised copy of the outfits used then. Even the former main sponsor 'De Olifant' (The Elephant) was present on the shirts as before. Thirty years later they are still a partner of KVO by the way, although these days they are more known as 'Woonboulevard'." 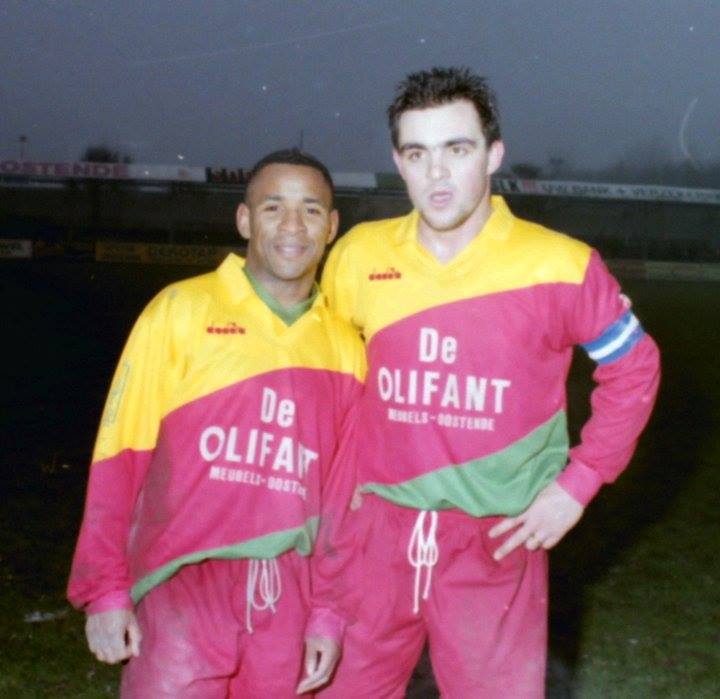 "When KVO asked us to be featured on the birthday shirts, we didn't hesitate," This is how Woonboulevard business manager Jos Maertens puts it. "We have been associated with the club as a commercial partner for a very long time and it shows in the past outfits. These new retro shirts perfectly approximate the original shirts from the early 90s."

Two star players from the old champion's team are Tony Obi and Yves Essende. "Tony is still connected to KVO today as he works full time in our hospitality team. Yves Essende on the other hand is the club's top marksman of all times and still follows KVO closely. Both were therefore perfectly suited to present the new anniversary outfits in an online video. In addition, both ex-players will also kick off the game against Koekelare," said Yves. so continues Bram Keirsebilck.

"I was pleasantly surprised when I heard what the plans were for the shirts and even more so when I saw the result," according to Tony Obi. "The shirts really look like these we played with at the time, yet there's a modern 'touch' to them. Nice work!" 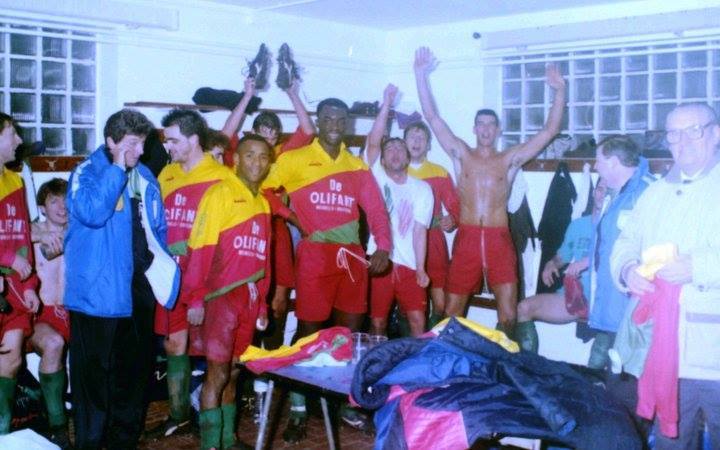 The shirts with which KVO promoted to the second division in 1992. With Obi and Essende in the middle of the picture.

The design of the shirts came again from the creative minds of the people of Decathlon / Kipsta.
"Once we knew what direction KVO wanted to go in, we got to work," Vincenzo Verhoeven of Decathlon tells us / Kipsta. "We added some subtle references to the past as well as the present. For example, we provided a patch with both the old coat of arms of the club and the new logo on it. Which one you see depends on the way you hold the shirt. On the sleeve you will also find the old logo of 'De Olifant', just like it used to be. A club has to move with the times, but should not forget its past. We bring those two things together perfectly in this shirt."

After the game against Koekelare, KVO will auction the shirts online for the benefit of the supporters federation Kustboys.
It will also be possible to buy special anniversary scarves, as well as the book published by supporter Kris Heddebauw on the occasion of the 40th anniversary.ste birthday.
Last but not least, there will also be mouth masks sold with the new logo on.

The specially designed birthday scarf will be for sale Tuesday evening in Koekelare and later on in the fanshop.

Watch the presentation video of the retro shirts here!