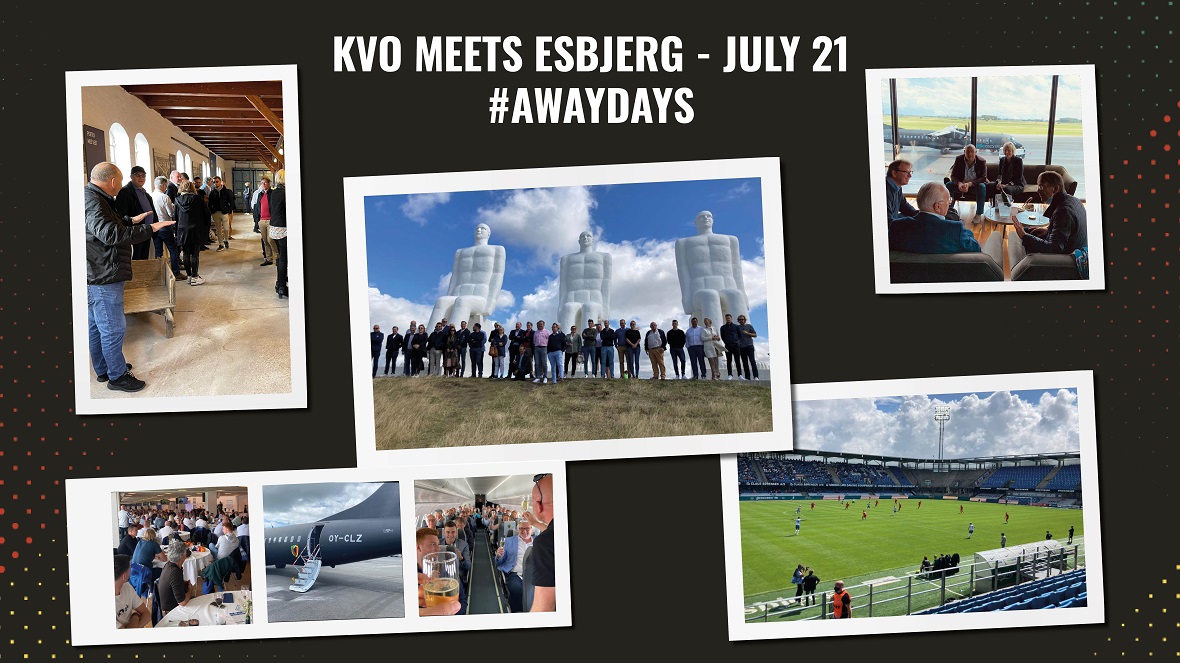 Forbrødring. Sounds Scandinavian, doesn't it? That's right, it is the Danish name for brotherhood. Because that is what it was last weekend, a brotherhood between the Danish Esbjerg and KV Oostende, two clubs that -mainly- have the same shareholders. A promising start of an international business network. An account of a successful weekend.

It's Friday afternoon and the place of meeting is the North Sea Aviation Centre in Ostend. A business centre right next to Ostend airport from where private jets are flying towards the horizon. Yes, the 40-strong KVO delegation is flying towards Esbjerg, Denmark, in a private jet (including the KVO logo!). Several commercial partners are present, ready for a weekend full of networking, knowledge gathering, football, fun and camaraderie. 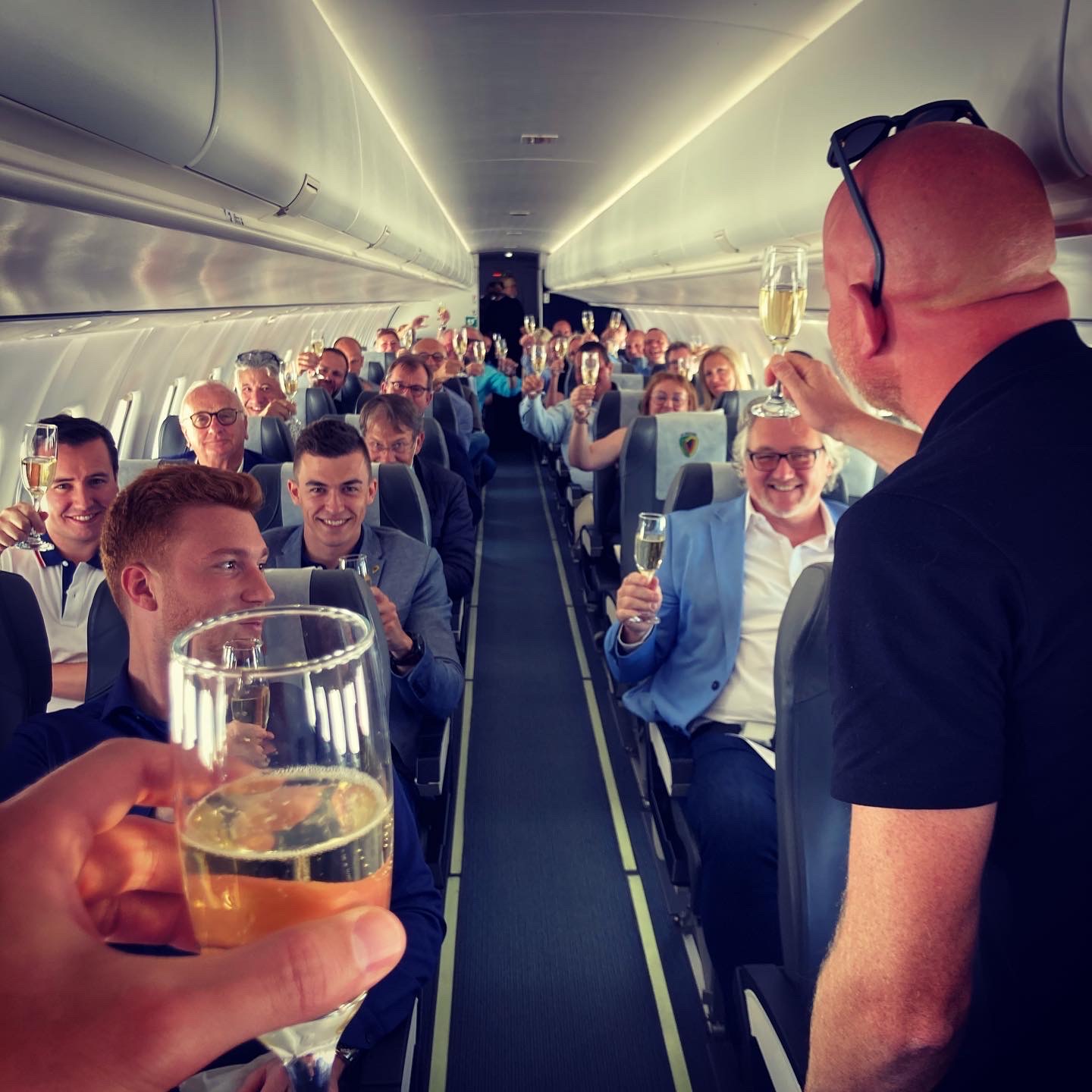 In the private jet on the way to Esbjerg

The weekend embodies the wish of our COO Thorsten Theys to give an international character to the KVO business club under the pretext that after a sterile covid year it can be something more and is part of the conviction that the broadened horizon also brings business opportunities for the KVO partners, internally and externally.

After a smooth flight, spiced up with a snack and a glass of champagne, the KVO delegation checks in, in Britannia HotelRight next to the lively and cosy market square of the Danish coastal city.
Exploring the city is not an option, however, as that same evening there is a gala dinner and KVO plays on the KRC Genk pitch, a match which of course cannot be missed. A livestream is set up in the hotel and Paul Conway - shareholder of both KVO and Esbjerg - has pulled a 'special guest' out of his hat. None other than Raphael van der Vaart will attend the match. The former Dutch international played for Real Madrid, Ajax, Tottenham and ... Esbjerg. After his career, he settled in the Danish coastal town and his son also plays football in the local football club.
In any case, Rafaël saw a spectacular match, because after a 2-0 and 3-2 deficit, KVO still wins with 3-4. Euphoria everywhere in the room and Executive President Gauthier Ganaye set up a live connection between the Ostend dressing room and our COO Thorsten Theys with a frenzied group at Hotel Britannia. Some go to sleep afterwards, others settle down at the cosy terraces in the city centre. 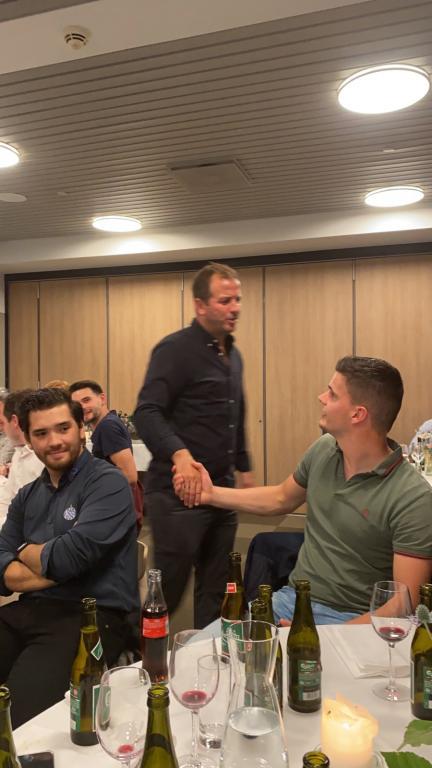 Saturday is all about football. Esbjerg plays at 13.30 against FC Helsingor. After a good breakfast, the KVO delegation is picked up by the Esbjerg players bus at 10 am. After that, a stadium tour in the beautiful Blue Water Arena, named after the main sponsor Blue Water Shipping, about which more information later in this article.
The Blue Water Arena can accommodate a good 18,000 supporters and is surrounded by ice hockey, padel, tennis and athletics fields. After a VIP dinner in the impressive infrastructure with a view of the green pitch, it's time for the real thing, the game against promotion rival Helsingor. A very young Esbjerg - that enters the game with five debutants - is trailing at an early stage, but manages to get back in the game before half-time. In the second half, they have to chase again and in injury time they get the 1-3 sledgehammer blow. Still, a courageous game from the very young Danish guard. 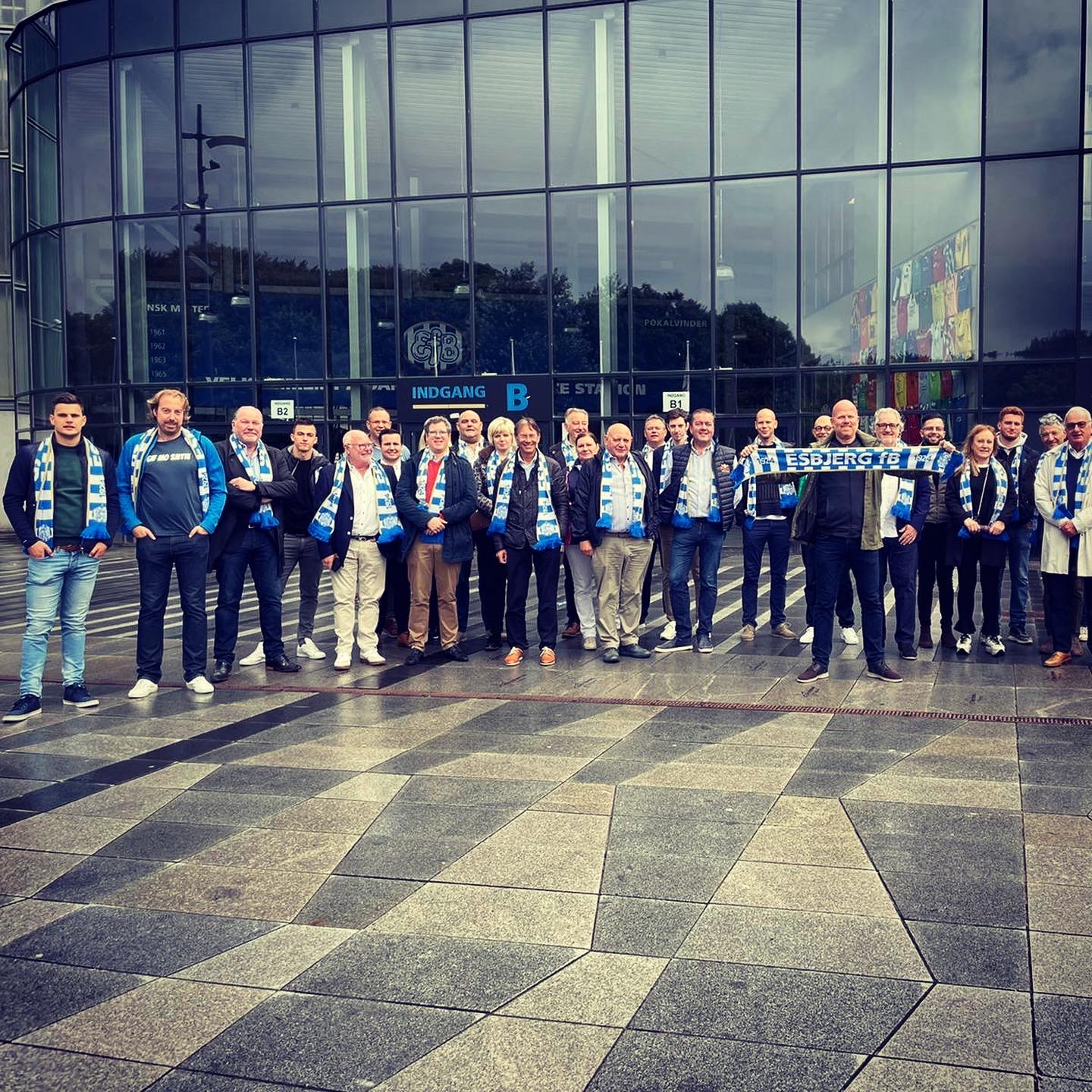 In front of the Blue Water Arena, the stadium of Esbjerg

After the match the delegation enjoys a rhum, whisky and gin tasting and then a delicious roast pork with buffet. Local Danish partners also join in and this creates a natural synergy between the sponsors of both clubs. As cherry on the cake, all attendees can participate in a 'Penalty Cup' on the hallowed Esbjerg-mat.
In the evening a visit to a local wine bar is planned and even the local karaoke bar is visited. The party goes on until the early hours.

Sunday morning - some with small eyes - the delegation will be picked up to visit the harbour of Esbjerg and get a tour at the main sponsor Blue Water Shipping. COO Dan Nissen explains in great detail how the logistics company transports by land, sea and air across Europe. The company is the flagship of the port of Esbjerg and has more than 60 branches worldwide.
After a delicious lunch on the spot we go to Mennesket ved Havet (Men at Sea), a 9-metre high sculpture group designed by sculptor, painter and graphic artist Svend Wiig Hansen. The sculptures are made of white concrete and portray four seated men looking out over the water of the Wadden Sea.
A rustic ending to an energetic, educational and just plain fun weekend where afterwards everyone agreed that what happens in the Esbjerg (Blue) Water, stays in (Blue) Water.

In short, a very successful weekend where the line will certainly be extended to the other clubs in the family. 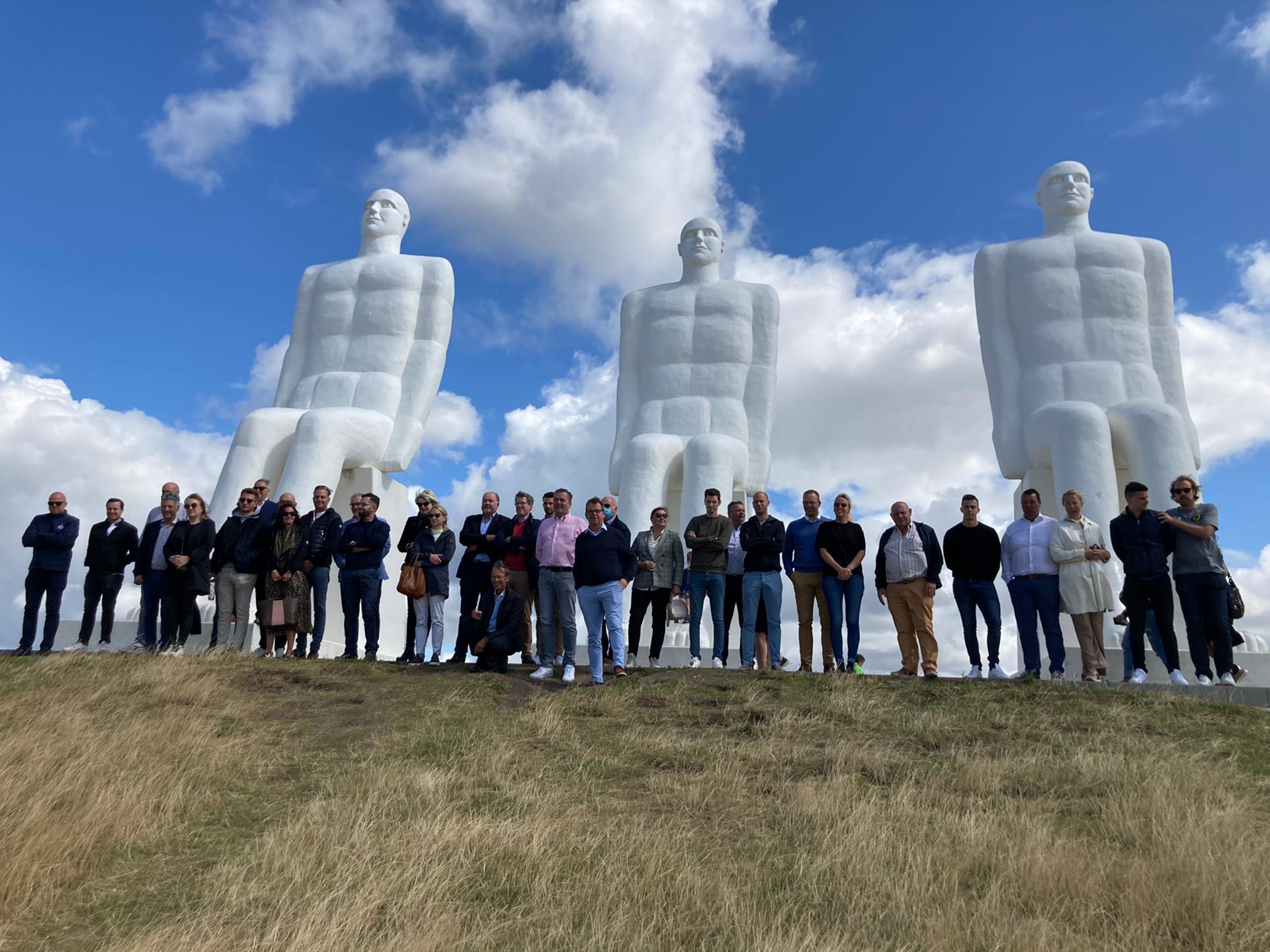 Visit to 'Men at Sea', a trademark in Esbjerg

Next partners made the trip to Esbjerg:

Special thanks to Daniel Lauridsen and Erik Skau Madsen of Esbjerg for the good reception and guidance and our own eventmanager Tijs Van Wauwe for putting together the well-rounded program. 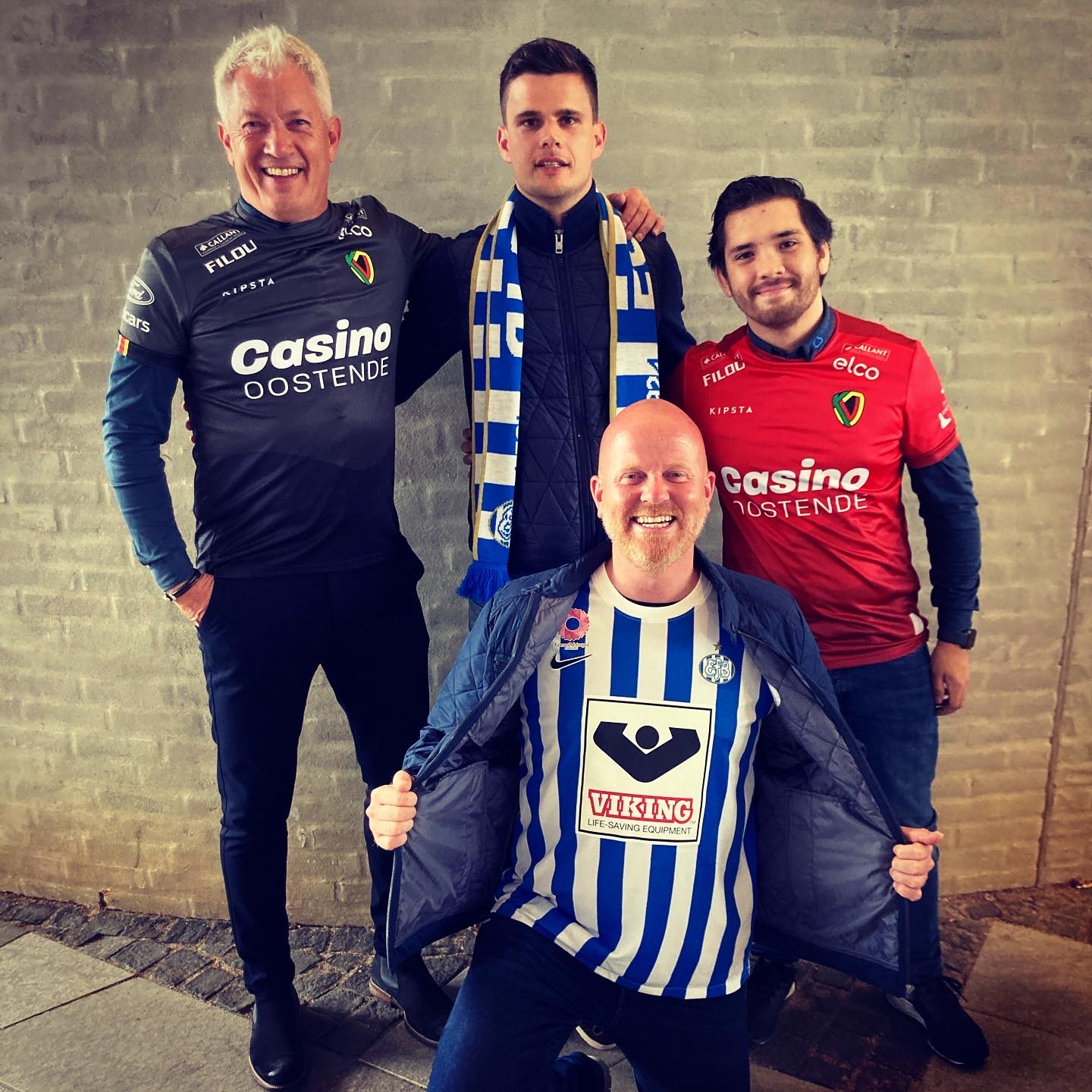