In the spring of 2020 - in the midst of the coronapandemic - KVO and the supporters' federation Coastboys organized a crowdfunding to save the club. At the time, that initiative came from KVO icons Sebastien Siani and the late Franck Berrier. The collected amount of about € 50,000 was eventually donated to three actors: the youth work, the supporters federation and several social projects. Two years later, the last crowdfunding money has now been handed over to the Pediatrics (children's medicine) departments of the two Ostend hospitals, AZ Damiaan and AZ Sint-Jan, Campus Serruys. Not coincidentally, a sum of money of € 8,400.

"At KVO, we still find local anchoring and identity important and the sums of money were therefore mainly donated to local, social projects such as, for example, previously the Proper Strand Lopers or Sealife for the adoption of our seal 'Lucy'. From that point of view, our two Ostend hospitals fit perfectly into this story. Both hospitals offer fantastic know-how and customer-friendliness in our city, which they proved once again during the corona pandemic. The amount of € 8,400 is also symbolic as the zip code of Ostend," said Bram Keirsebilck of KVO.

At the AZ Damiaan they are already delighted with the donation.
"We are very grateful to KV Oostende for donating this beautiful amount," commented Karoline and Griet, pedagogic employees At the Pediatrics Department.
"With that money we will purchase, among other things, a large mobile snooze lamp. This lamp can be used to reduce stress during painful treatments. The lamp also brings tranquility to children with disabilities and teenagers who need a time-out. After prospecting at the children's hospital in Antwerp and the experiences shared, it seemed like a very sensible and well thought-out purchase." 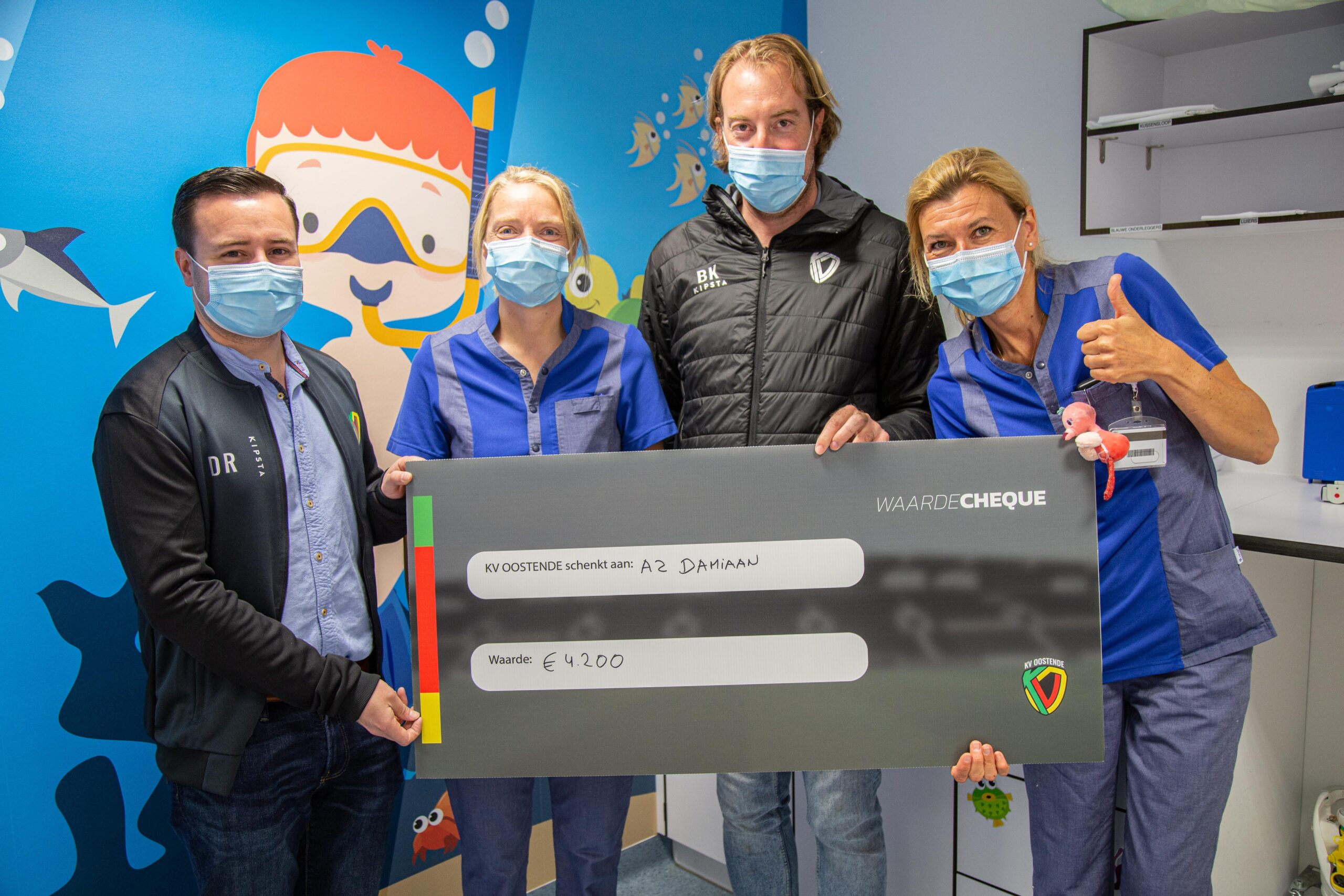 Also at AZ Sint-Jan, Campus Serruys they are over the moon with the donated amount.
"With the amount of €4,200, we can do some nice business," explains Head nurse Pediatrics Anna Marinus. "Among other things, we will spend the money on furniture for the play class, a star projector to distract the children during painful acts and board games and reading books for older children."

With the donation of the €8,400, the entire crowdfunding money has now been used up as well.
"On behalf of KVO, we once again thank the people who deposited money at the time. The amount was passed on to the supporters federation Coastboys, several local social projects and our North Sea Interior Se'Academy," concluded chairman Frank Dierckens.