An efficient Kortrijk wins with 4-5 of KVO, that started with an experimental team, after a nice practice match.

The home team started the game eagerly but the goal fell on the other side. After a hands ball in the penalty area, Henen kicked the visitors into the lead (0-1). The arrears were soon reversed when Albanese drove a free kick into the crossbar (1-1). The Kortrijkzanen responded through De Neve who aimed at the box from close range. The home team combined quickly with numerous chances but the goal fell again at the other end. After a quick counter, Henen was able to get in Hubert's way and he beat the Ostend goalie with a breathtaking shot (1-2). The Coastal Boys did not seem upset and continued to play good soccer. After a nice action on the right flank, Rocha Santos' cross ended up in the corner of the goal via Sissoko's leg (2-2). Vanderhaeghe's team smelled blood and created chance after chance with half time in sight, but Gueye, Musayev and Duncan were unable to decide.

Vanderhaeghe made a number of substitutions at halftime, but the game pattern remained the same. Ostend continued to put the visitors under pressure. The home team got a penalty quickly after the infiltrating Koziello was pushed in the sixteen. Kvasina kicked the ball hard wide from the spot. As often, the goal fell on the other side. After a quick changeover the visiting striker was able to slide the ball under substitute goalie Wouters into the goal (2-3). Kortrijk could not enjoy the lead for long, as Kvasina made up for his miss by tapping in a cross from the industrious Boonen (3-3). The festival of goals continued as Berte also scored a goal after another beautiful Ostend attack (4-3). Afterwards the coastal team got numerous opportunities to deepen the score, but the goals fell on the other side. Each time the home defence was put out of action after a quick counter attack (4-4 and 4-5).
After a more than satisfactory performance, an experimental Ostend loses to a very efficient Kortrijk. Sunday, the gala match against Vitesse Arnhem awaits at the Diaz Arena.
Goals:
8' 0-1 (Henen), 14' 1-1(Albanese), 18' 1-2 (Henen), 30' 2-2 (Sissoko, owngoal), 57' 2-3 (x), 61' 3-3 (Kvasina), 63' 4-3 (Berte), 74' 4-4 (x), 90' 4-5 (x) 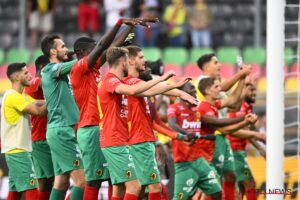