HomeAll NewsVICTORY FOR U23S AFTER A SPECTACULAR GAME

VICTORY FOR U23S AFTER A SPECTACULAR GAME

After a real thriller our youngsters took the measure of RWDM. Two minutes before the end of regular playing time, the visitors still managed to beat RWDM 2-3, but our boys made it 4-3.

KVO was actually the better team throughout the match, but still they were twice behind with 0-2 and 1-3. Darren Degryse put the 1-3 on the board, 20 minutes before the end Brachet headed the connecting goal against the ropes. It seemed to stop there, but a real final offensive gave joy to De Schorre: Delbol scored the equalizer in the 88th minute and in minute 92 Bonsu scored the winning goal. An exciting game with a crazy ending in which our youngsters drew the longest straw. 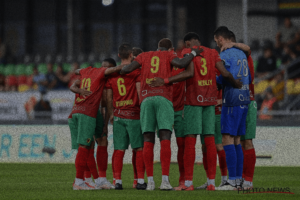